This column will bring us more than halfway through 2017 already!

My arms are sore this morning from all the painting we did yesterday. Sister Emma and I helped paint three rooms at our sisters Verena and Susan’s house yesterday. The new floor will be put down next week so we wanted the painting done before that.

Tuesday evening Verena and Susan moved back to their house. Most of their furniture is still here in our basement. They do not have hot water yet and no refrigerator but they are using a cooler with ice for now. It doesn’t take much food for the two of them. I told them they can come over to use our shower since they don’t have the water heater hooked up yet. Also their laundry can be washed here for now, but they are just glad to at least be back in their home after three months. They appreciated all the gifts of money from readers. With sister Verena’s health not being the best lately and unable to work a lot, it helped out more than you know. Verena couldn’t help paint yesterday as her feet hurt to walk on them. The swelling has gone down some.

While we were painting, daughter Verena, 19, took our pony Stormy and the pony cruiser, to drive Loretta, 17, Lovina, 13, and Kevin, 11, to the dentist to have their teeth cleaned. Good ole Stormy—what would we do without him? He has taken us many miles over the years we have had him.

For Sunday, daughter Elizabeth and husband Timothy served a brunch for our family, sister Emma, Jacob and family, and sisters Verena and Susan. It was delicious. She made a big roaster full of Breakfast Casserole and French Toast (Overnight) Casserole (page 53 of my new cookbook, The Essential Amish Cookbook) and she also made pancakes, served with their own maple syrup. We all took in a dish or two of dessert so we ended up having way more food than we needed.

After the dishes were washed we played games outside. We played croquet as well as “Aggravation” under the shade tree. As usual there was a lot of excitement in the Aggravation game.

Elizabeth made root beer floats for everyone later in the day. And of course little Abigail received the most attention. Every time I see that little girl she has learned to do more new things. When we have a silent prayer before we eat she will fold her hands together to pray. But this only lasts for a few seconds, just long enough for all of us to see it; then she wants the “Amen” part to come already.

We then had birthday cake before we left for home. The cake was in

honor of sons Benjamin, 18, and Joseph’s, 15, birthdays. I asked the boys if it’s okay to just have one cake for both their birthdays and they were okay with that. With so much cake around lately I thought it was wise to just have one. Joseph turned 15 on July 24 and now we won’t have a birthday in our family until September when Kevin and Abigail will have birthdays.

I was helping daughter Susan this week with canning pickles. We also made four batches freezer pickles for her. Now she should have some when they host church services in September. Mose’s parents sent her a few buckets of cucumbers so she was glad to have enough to make pickles.

I want to can and freeze some pickles 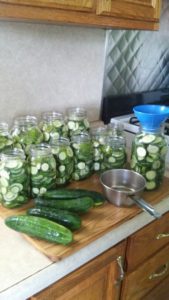 too. Daughter Elizabeth is coming today and will bring cucumbers. Zucchini is in full swing and we are enjoying making different casseroles. Daughter Susan is trying to make a recipe to share with you readers—our newest invention of using our many zucchinis. God bless all of you! Meanwhile enjoy this Breakfast Casserole recipe.

Mix sour cream and soups. Put half of mixture in the bottom of a roaster (needs to be bigger than 9×13). Cut tortillas into squares and put on top of that. Layer the remaining ingredients in order. Add the rest of the sauce. Top with more cheese. Bake at 350 degrees for 40 to 60 minutes.

Lovina Eicher is an Old Order Amish writer, cook, wife and mother of eight. She is the co-author of three cookbooks; her new cookbook, The Essential Amish Kitchen, is available from 800-245-7894. Readers can write to Eicher at PO Box 1689, South Holland, IL 60473 (please include a self-addressed stamped envelope for a reply) or at LovinasAmishKitchen@MennoMedia.org.