It’s Thanksgiving week already! We will have my sisters Verena and Susan and sister Emma, Jacob, and family here for Thanksgiving dinner and also all of our family. I am planning to prepare two turkeys plus all the trimmings.

Son Benjamin, 16, was excited last week to shoot his first deer. My husband Joe and Benjamin cut and ground all the meat on Saturday. Joe wants to make jerky and summer sausage with it.

Friday evening our family traveled the seven miles to Timothy and daughter Elizabeth’s house with our horses and buggies. Elizabeth had prepared a tater tot casserole and Timothy grilled venison burgers and steak. They wanted us to spend the night there so Joe could go hunting with Timothy early on Saturday morning.

After supper was over we played “Donkey” and enjoyed popcorn. For those of you who don’t know how to play Donkey, I’ll explain the best I can.

We use Rook game cards. Every player is given three cards and spoons are placed in the middle of the table. Put one less spoon out than there are players. One of the players takes the cards that haven’t been passed out and takes one card at a time and passes it to the next player. The object of the game is to see who gets three cards with the same number first. So if you get a number you want, then switch it with one of your three cards and pass it on. The first player that gets three cards the same will grab a spoon. One player will be left without a spoon and will get a letter “D”. The first player that has the whole word “donkey” spelled out loses.

After they have lost, the other players keep playing but aren’t allowed to talk to the “loser”. If you do, then you get another letter. Son Joseph, 13, was the first to be the “donkey” (smile) and he was good at tricking us into talking to him. It is so easy to forget if he asks a question, to answer him. We had a lot of fun but it’s a noisy game. Spoons fly around a lot after the first person grabs one.

We were excited to wake up Saturday morning with a layer of snow on the ground. It snowed most of the day on Saturday and I think we received around seven inches of snow. The hunters were glad for the snow too. The snow clung to the tree branches and made such pretty scenery. Only God can paint the earth with such beautiful scenes. The children enjoyed sled rides on Saturday evening.

Sunday we went to church for the first time since our church divided into two districts. It was smaller but we had a lot of visitors from other districts so there were still a lot of people there. 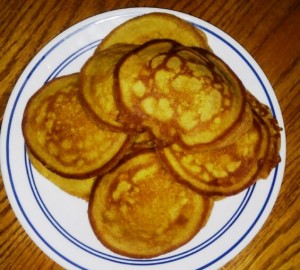 For this week’s recipe I’ll share pumpkin pancakes. Daughter Susan didn’t have to work at the factory yesterday and today, so we made these for our breakfast this morning. If you love pumpkin, you’ll like these pancakes. We had maple syrup with them.

I wish everyone a blessed Thanksgiving and safe travels if you are traveling, or anywhere where you are—be safe! God’s love to all!

Whisk pumpkin and egg together until smooth. Add in remaining ingredients and whisk until smooth. Fry in skillet like normal pancakes.