Supper is being made on the grill, which gives me time to write this column. It’s just daughter Loretta and the boys home again, so our table seems empty. Daughter Lovina is at daughter Susan’s house this week.

Daughter Verena and sister Verena headed out for Indianapolis, IN, this morning. Yesterday the doctors said only one visitor a day is allowed now for sister Susan at the hospital.

Cousin David and his wife Karen and Aunt Caroline graciously offered their home for Verena and Verena to stay in. During the day cousin David will drive sister Verena to the hospital to visit sister Susan. Daughter Verena will stay with Aunt Caroline, who needs someone to help her out. They live in Lafayette, IN, an hour away from the hospital.

This morning we received the sad news that Aunt Shirley from Lafeyette, IN, passed away. Our sympathy goes to Uncle (Albert) Jr. and his family. Uncle Jr. is 90 or almost 90 and is the oldest of my dad’s 12 siblings. My dad was the second oldest of the 13 children. Uncle Andy was the third child in the family (Aunt Caroline’s husband), and he passed away a few years ago.

Our beef is cut up, bagged, and either in the freezer or canned and in the basement. We made and bagged over 300 hamburger patties. We sliced and froze steaks. And, of course, we are enjoying making what we call Rare Beef. We slice the tenderest part of the steak really thin, put salt and pepper on it, and deep fat fry it very quickly on each side. If your oil (we use olive oil) is hot enough it should be done all the way through and be very tender to eat. 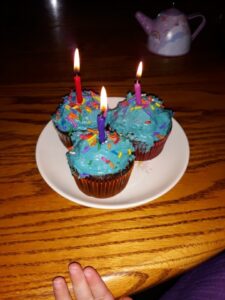 Friday, January 15th, our family took supper in for granddaughter Jennifer’s third birthday. A good friend of theirs brought an ice cream cake for her, and daughter Elizabeth brought cupcakes. I made a pasta casserole and took a salad and ice cream. With everything that was brought in we had more than plenty. We all tried to brace up and be happy for Jennifer, in spite of the fact that Mose wasn’t there to help her blow out her candles. Jennifer told Susan that morning that she knows Daddy will come home on her birthday and bring her a present. She said if he doesn’t, she is getting a driver (an Amish driver) to go get him. She seems to still think her Daddy is coming home someday.

Saturday sister Liz and Levi and their daughter Suzanne, brother Albert and Sarah and daughter Sylvia came to Michigan for the weekend. They stayed with sister Verena so daughter Verena could come home for the night. It felt good to have Verena home and to just spend the night together catching up.

Sunday morning Joe and I, daughter Verena, sons Benjamin, Joseph, and Kevin and a few friends of theirs went to sister Verena’s house and had brunch with all of them. I made two breakfast omelets to add to the menu of biscuits and gravy, potatoes, etc.

Sister Susan was off the ventilator earlier this week but still on oxygen. We could talk to her over the phone on Sunday. Her voice is very weak, and she has a long road ahead.

Tuesday night (January 19) at 10:00 p.m., the doctor called sister Verena to let her know that they are putting sister Susan on the ventilator again. Susan’s lungs are not too well, and she has a lot of mucus in her airways. They will be sedating her again since they are putting her on the ventilator again. Please pray for her and for all of us. God’s blessings to all!

Additional fillings as desired, such as mushrooms, olives, smoked sausage

In a large bowl, combine cream cheese and milk. Whisk until smooth. Add flour and salt. In another bowl, whisk eggs, then add to cream cheese mixture. Pour mixture into parchment-lined pan and bake 30-35 minutes, or until puffy and golden.

Remove pan from oven and spread mustard and half the shredded cheese onto the omelet. Add the bacon, ham, onion, bell pepper, any additional fillings as desired, and most of the remaining cheese. Roll up in jelly-roll fashion, removing paper as you roll. Garnish with remaining cheese. Cut into slices to serve.