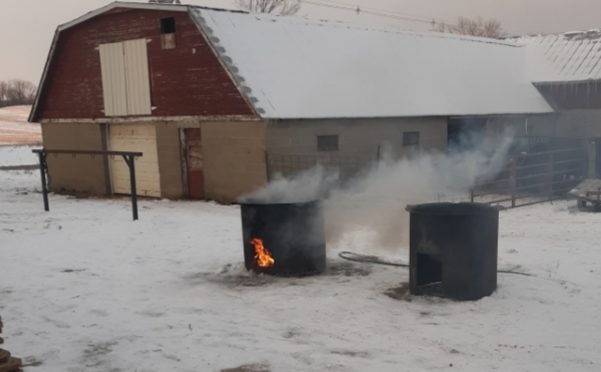 February is more than halfway over already. We are happy to be done with our pork butchering for this winter. Friday evening my husband Joe, sons Benjamin and Joseph, sons-in-laws Tim and Mose, and Loretta’s special friend, Dustin, dressed three big pigs.

On Saturday morning we began working early on cutting up the meat. Mose and Susan’s pig was cut up first. All the bones were cooked in the big kettle outside while the hams, pork chops, and bacon were sliced, the sausage ground, and lard rendered. Last of all, we made pon hoss. We had twelve gallons of juice to make into pon hoss.

Sister Emma and Jacob and sons and sisters Verena and Susan were also here on Saturday to help our family with the butchering. A cousin of Joe’s father stopped in to see how pon hoss is made and stayed most of the day.

Everyone came for breakfast. The girls and I made two big casseroles the night before to have for breakfast. Also on the menu were hot peppers, cheese, donuts, coffee, orange juice, apple juice, and milk.

For lunch, we fried fresh tenderloin, served along with mashed potatoes, gravy, mixed vegetables, corn, lettuce salad, cheese, hot peppers, blueberry delight, cake, brownies, peaches, and ice cream. We also pickled the heart and tongue from the pigs. We cooked them in the pressure cooker then diced them up and put them in vinegar and onions. A lot of people liked it, but I didn’t even try. I am just not into eating different things like that. Maybe if I didn’t know what it was it would be different.

The pigs were very lean, so we didn’t get as much lard, but our bacon was really meaty, which is what we like. We still had more than enough lard, which we poured into jars and sealed with lids. I think it stays fresh longer like that. We seasoned some of the cracklings with different spices and the boys tried making a few potato chips in the kettle.

At the end of the day Jacob and Emma went home, but sisters Verena and Susan, Tim and Elizabeth and family, Mose and Susan and family, and nephew Steven were our overnight guests. We put up air mattresses and found enough room for everyone to sleep. It was enjoyable to have everyone here.

Sunday morning sons Benjamin and Joseph and Dustin went to church at Dustin’s brother’s house. Loretta has a bad cough, so she stayed home. Daughter Susan and I were up already so she made them breakfast before they left. Everyone was tired from the long day, so we made brunch for everyone. On the menu were pon hoss, fresh bacon, eggs, soup, toast, cheese, cookies, cake, juices including homemade V8, coffee and milk.

We had a full house but its always fun to wake up with the grandchildren here. Ryan, almost seven months, Jennifer, 2, and T.J., 1, were awake right away. Baby Allison, 8 weeks, was also awake early and ready to eat. Abigail, 3, slept with the girls and was happy to wake up beside her aunts.

The rest of the day we mostly sat around resting and visiting. Everyone headed for home in the afternoon. Dustin, Benjamin, and Joseph came back from church. Benjamin and Joseph went back to Dustin’s brother’s house for supper after evening chores were done. Loretta was still not up to leaving so Dustin stayed here. I made fresh sausage sandwiches for supper for the ones still here at home. The house seemed quiet after everyone left.

This week I’ll share the recipe for campfire stew from my cookbook, The Essential Amish Cookbook. I made it earlier this week when my daughters and grandchildren were here and tried adding mixed vegetables instead of green beans. We all liked it that way. I also made it in a large pot on the stove instead of outside since it’s cold.

Put beef chunks in a kettle or large pot with enough water to cover. Bring to a boil and boil for 10 minutes. Add potatoes, green beans, and onion, adding enough water so the vegetables are well covered. Add bouillon. Boil until vegetables and meat are tender. Season with garlic powder, salt, and pepper. Remove whole onion if you wish.