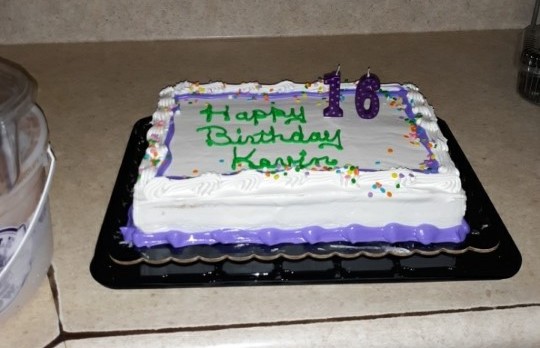 Another week has passed by since my last column. We made it to Kentucky and Tennessee for both weddings and are now back in Michigan. We were thankful for safe travels to and from the weddings. Dan’s (who died in the accident with son-in-law Mose) wife Jodi was our driver and she did a wonderful job. It couldn’t have been easy driving for all of us. She is a nice person to have around. I know she is still hurting just like daughter Susan, both missing their loved ones. It always makes me sad when I see Susan and her children drive in without her beloved Mose beside her. Seeing sister Emma without Jacob and sister Verena without sister Susan seems so unreal. It can get overwhelming and that is why we need to let go and let God. We need to trust his plans are different than what we want sometimes.

At Michael and Laura’s wedding I was a cook and my job was to prepare the fresh fruit for the fruit bowls. It was a good combination of strawberries, blueberries, grapes, and kiwi. The menu consisted of fried chicken, mashed potatoes, gravy, buttered noodles, dressing, mixed vegetables, broccoli/cauliflower salad, bread, butter and jam, several kinds of pies, angel food cake, mixed fruit, and pudding.

In the afternoon we started out on the 4 1/2 hour drive to Tennessee. We stayed at a motel and attended the wedding at the church for Jamin and Saloma. Their weddings are different than ours as the father walks the bride down the aisle. The couple left after the wedding for their several week honeymoon. We wish both couples God’s blessings as they start their lives together as one.

We had supper with Saloma’s parents Pete and Carol (Joe’s sister) along with some of Joe’s family and others who had attended the wedding. We then headed back to the motel. The children enjoyed swimming at the pool. The next day we drove towards home about 5 1/2 hours then slept in a motel outside of Indianapolis, IN. The next day we spent the day at the Indianapolis zoo. We had a little over three hours to drive home.

We had a nice time but everyone was glad to be home again.

Son Kevin turned 16 on September 2nd while we were gone. Monday night we had cake and ice cream in honor of his birthday. Also on the menu were banana poppers and Italian potatoes and sausage.

We had some storms go through our area again but we didn’t get anything much. Hopefully no one else did either. Daughter Susan and children and daughter Verena came for the night.

Today Joe’s sisters and nieces will come help us clean. Plans are to clean the basement and can room, and if we get that far, our breezeway.

Saturday we have more help coming. Church services were set to be here September 19th. That isn’t far off and then the wedding of daughter Loretta and Dustin is coming up right after that.

God bless all of you as we travel into the unknown future.

Mix sliced potatoes, onion, green pepper, salt, pepper, and oregano with olive oil. Bake in a 9×13 inch pan covered for 1/2 hour at 350 degrees. Remove from oven and drain. Cut sausage in pieces and add to potato mixture. Continue cooking for 1 hour or until sausage is done. Some prefer to broil uncovered, cooking until sausage is browned.