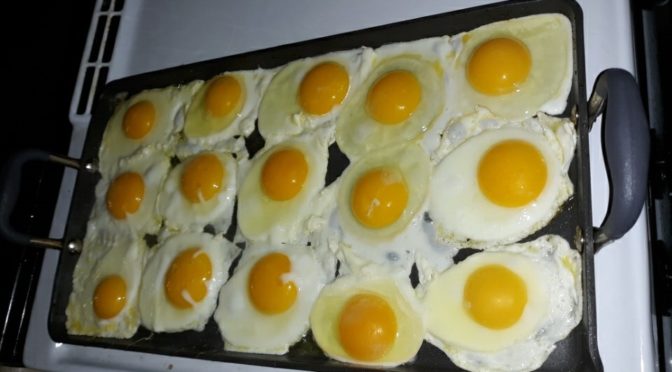 On January 31, it was two years since brother Amos passed away in his sleep and shocked all of us. He was only 56 years old and left his wife Nancy, children, grandchildren, one brother, and six sisters to mourn. He is so greatly missed by many. We know God makes no mistakes, so we do not question why.

Friday evening, we traveled the five and one-half miles to daughter Mose and Susan’s house for the birthday supper honoring Mose, Susan, and Jennifer. On the menu were tater tot casserole, barbequed chicken, coleslaw, sliced cheese, and cake.

A reader recently asked why cheese is included with most of our meals. I think our love of cheese is a family thing. I remember my parents ordering their cheese by the horn from our milkman, and the money to pay for it would just be taken out of their milk check.

After Joe and I were married we also sent milk in with a milk truck that picked up our two stainless steel cans of milk every day. We ordered our cheese from him the same way my parents did. We eat mostly colby cheese, but like Velveeta in grilled cheese sandwiches as well. We also buy Swiss cheese for a change, but our children love colby with their meals. We go through a lot of cheese; with packing lunches every day and putting some in their sandwiches, it doesn’t take long to use up a horn of cheese. My neighbor Susan has a bakery and also sells some bulk foods, so I usually order my cheese from her. It is much cheaper to buy it by the horn than by the pound.

Friday afternoon I sent sons Benjamin, 20, and Joseph, 17, to get a few groceries for me in town. I ordered two heads of lettuce so I could make a salad to take along to Mose and Susan’s. They usually do pretty well with getting my groceries, but saw the heads of cabbage, and thinking they were lettuce, bought two heads. That is how we ended up having coleslaw for supper. We did give them a hard time about it, but I am glad they went shopping for me. Joseph always likes lettuce with his sandwich for lunch. I asked him if I should put cabbage in there instead. I told them next time to feel how much heavier cabbage is than lettuce. I can’t complain though, because they do a good job of running after my errands, and coleslaw tasted good for a change. I usually only make coleslaw when I have cabbage from my garden.

Monday, Baby Allison was a month old and Ryan was six months old. Time does not stand still! Daughter Elizabeth took Allison to the pediatrician in town for her one-month checkup. T.J., age 1, also went with her, so daughters Verena and Lovina went along to help her. Abigail, 3, stayed here with Loretta and me.

We washed our laundry in the basement and Abigail was so entertained by playing. I opened a tote of toys our children used to play with including all their tea sets and little dishes. She was so fascinated that grandma finally has more toys. I don’t usually like to set them out as there are small items that T.J. would put in his mouth.

Daughter Lovina helped Elizabeth and Tim on Tuesday, stayed overnight, and then came home with Elizabeth and children on Wednesday. Daughter Susan and children also came for the day. Mose came after work and they stayed for supper. Elizabeth and her three children left for home around five. She sure has her hands full; T.J. does not realize that climbing chairs and running on the table is dangerous. He is quite a handful to watch but is such a sweet and lovable little boy.

When Mose and Susan left for home, they told Jennifer to say thank you to grandma. She said, “thank you and welcome.” Such precious moments the grandchildren bring to us.

Preheat oven to 350 degrees. Grease and flour a 9×5 loaf pan. In a small bowl mix together brown sugar and cinnamon and set aside. Peel and chop the apple and set aside.

In a separate bowl, beat the white sugar and butter until smooth and creamy. Beat in eggs one at a time then add vanilla.

In a larger bowl, combine flour and baking powder then stir in the sugar/butter/egg mixture. Add the milk and stir until smooth.