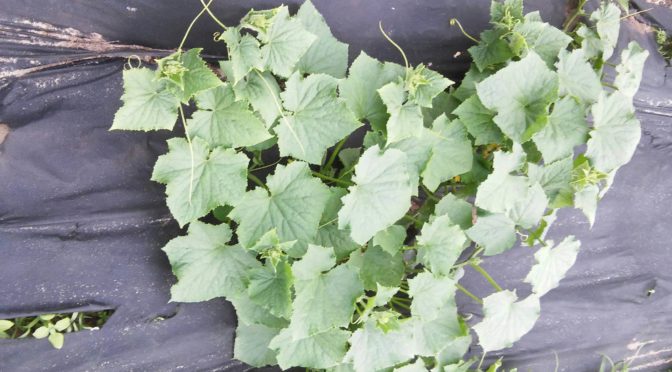 We have entered the month of July. The year 2019 is halfway in the past. July 1 was daughter Loretta’s birthday. She turned 19 years old. Son Benjamin is also 19, until his birthday on July 14. It always brings back memories from that year they were born. My dad passed away at age 69 six weeks before Loretta was born. Then we had church services at our house when Loretta was five weeks old. With Loretta being our fifth child and my oldest only being six at that time, I do not know how I did it. I do remember that I said never again would I host church services with a five-week-old baby. I depended a lot on my mother and five sisters to help out and get my cleaning done for church services.

Loretta’s boyfriend Dustin, Loretta, daughter Verena, and son Kevin went fishing out on a nearby lake on Dustin’s pontoon. On Loretta’s birthday the girls helped get laundry washed before they left. In the evening, Tim, Elizabeth, Abigail, and baby Timothy, Mose, Susan, and Jennifer also came in honor of Loretta’s birthday. Pizza and chicken wings were on the menu.

Tim, Mose, Dustin, and son Benjamin are all on vacation this week. Son Benjamin is gone for three days fishing on Lake Erie with a few friends. They are camping in tents close by the lake. They planned to go walleye fishing out on the lake. I’m sure he’s having an enjoyable time, but the house seems empty without him around.

Yesterday, Tim and Elizabeth left Abigail, age two, and six-month-old baby Timothy (or T.J., as little Abigail calls him) here, as Tim and Elizabeth were heading to town with horse and buggy. We had fun watching them. Abigail likes to follow Kevin around and ask him one question after another. Kevin does pretty good entertaining her.

When she heard Loretta had a birthday, Abigail said, “My birthday is September 10 and I will be three.” I was surprised that she knew that.

The little grandchildren add so much fun and happiness to our life. My dad would always joke around and say if he had known the grandchildren would be that much fun, he would have had them first.

We are having more goodies from the garden, although it seems later than other years. We had quite a few days of 90-degree weather with the humidity really high. Tonight we had a shower, so the rain makes it more bearable. The garden was in need of rain.

Today I went with my husband Joe to the doctor. They did an EKG and found he has fluid around his heart. He has an open wound on his leg that doesn’t want to heal, and his legs and feet are swollen bad. The doctor gave him a few antibiotics and wants to see him in a few days. They also did some more tests and blood work, which will probably let us know more when we go back. But meanwhile, the doctor ordered him to keep his feet elevated and to stay out of the hot sun. Joe sees the garden get more weeds and thinks he should go work out there. A big garden is nice to have, but it requires a lot of labor.

We traveled to Bryant, Indiana, to Aunt Lizzie’s funeral last week. We saw many uncles, aunts, cousins. It was different to not see Uncle Elmer with Aunt Emma. I’m sure it refreshed everything with losing her husband not too long ago.

After the funeral the six of us sisters walked through Aunt Lizzie’s house reminiscing of long ago. How well I remember when Uncle Chris and Aunt Lizzie packed up their belongings and we helped them move to this home. Only a pole barn to move into, but now the property has two houses, a big barn, two chicken barns. Their daughter Lovina and husband Pete and family live in the big house. I’m sure with Aunt Lizzie gone the little house will seem really empty.

Life goes on, changes are made—God helps us accept these changes, but it all takes time to heal.

Combine cucumber, bell pepper, and onion in a bowl. Combine water, vinegar, salt, and optional sugar, and pour over vegetables. Refrigerate for a brief time before eating, or make ahead for the next meal.