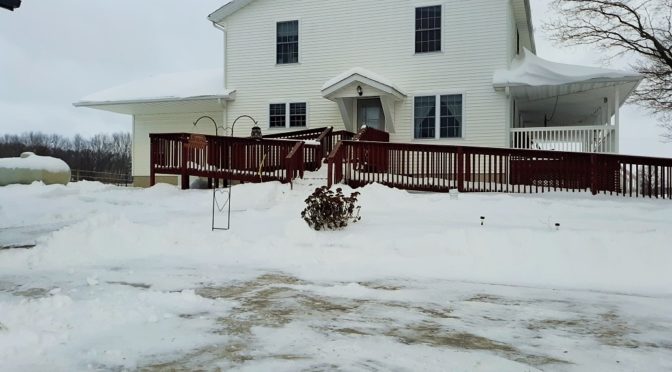 Today baby Allison is already two months old. She’s so petite but very active. Last Sunday I was holding her in church, and she made so many facial expressions. When we started singing, she wasn’t sure if she should be sad or smile. It was so cute to see her smile then change to a frown and almost cry then smile again. Such little sweet innocent angels. She has brought much joy to daughter Elizabeth and Tim. Abigail likes being the big sister and T.J. isn’t sure if he wants to hug her or try to slap her. That little guy keeps them on their toes.

Baby Ryan is seven months old today. He weighs 20 pounds and is a tall guy. He gets around everywhere with his walker when he is in it. Ryan did his best to ignore me when he saw me holding baby Allison. Not until I took him would he look at me. Isn’t it amazing how fast they catch on to things? Jennifer makes sure to push Ryan’s walker away from things he shouldn’t have. She will say, “No, Ryan, you can’t have that.” Ryan has such a calm personality and is full of smiles. He tries to talk a lot. Jennifer and Ryan keep Mose and Susan busy, but they enjoy every minute of it.

Abigail, 3, sings a German song that she learned from just hearing her father Tim sing it. She does a good job. It’s amazing what young children pick up so fast.

Sons-in-laws Tim and Mose have been busy tapping Maple trees for syrup. They use bags now to collect the sap, instead of buckets.

Yesterday we awoke to winter weather again with the world coated in white. I would guess we have six to eight inches of snow. It’s the kind of snow that sticks to everything and, like our children used to say, the kind that makes good snowmen. I remember one year they made a snowman and the weather warmed up overnight. Son Benjamin wasn’t very old and woke up the next morning to see the snowman had disappeared. He looked up at the fluffy white clouds and said, “Mom, our snowman is up there.” He was so sure those fluffy clouds were his snowman.

Schools were closed yesterday due to the road conditions. Last night we had a voice mail from our school saying school has been cancelled for today as well.

Daughters Elizabeth and Susan had plans to come home yesterday for the day with a driver. The driver cancelled at the last minute, so they had some disappointed little children who were looking forward to spending the day at Grandpa and Grandma’s house. It is understandable when the roads are not good but trying to explain that to little children is hard. Their plans are to come today instead. It has quit snowing so maybe it will work out.

Son Joseph, 17, was home from work Monday and Tuesday. The contractor he works for is son-in-law Tim’s brother-in-law. His father passed away and the funeral was Tuesday, so they didn’t work. Monday evening we went to the viewing, which was a two-hour drive with a hired driver. Those going with us were my sisters Verena and Susan, sister Emma and Jacob, daughter Elizabeth, Tim, and baby Allison, my husband Joe and I, and son Joseph and daughter Lovina. We dropped Abigail and T.J. off at daughter Susan and Mose’s house until we came back. It was 4:00 p.m. when we started picking everyone up. It was after 11:00 p.m. when we got home so it was a late night by the time we made it to bed. Our sympathy goes to the family. It is never easy parting with loved ones. After traveling that many miles, we are always thankful to make it back home safely.

Sunday we will already be entering March. Where did the time go? Spring is just around the corner which I am so ready for, but God controls the weather so we will accept whatever he sends.

Take care! God’s blessings to all!

Layer potatoes in the bottom of a 9×13-inch pan. Pour white sauce over potatoes. Bake at 350 degrees for 40 minutes. Remove from oven and layer on pizza sauce and remaining toppings. Bake 15 minutes longer.

Melt butter in saucepan. Stir in flour until smooth and bubbly. Slowly add milk and salt stirring constantly until thickened and smooth.