We are into the first week of March already! Even though everything is covered with snow again along with some single digit temperatures on a few mornings, I keep telling myself that March is also when the calendar says spring arrives. Think spring!

Yesterday daughters Elizabeth and Susan and their sweet little ones came to spend the day. Susan brought their buggy and horse and picked up Elizabeth. The little girls were bundled up but still had little cold red cheeks when we took off their coats. Son Joseph, 16, carried in all three children and then unhitched the horse and put him in the barn. I’m sure after the drive here my daughters were glad to have Joseph take over with the horse.

How fun for Grandma to sit there and help take off their coats and see the smiling little faces. Even baby Timothy giggled for me. He is 11 weeks old and a little over 11 pounds now. I had not seen the girls and their little ones since Friday evening and that seems long for me.

Our supper was meatballs, lasagna, dinner rolls and dirt pudding. Elizabeth made the dinner rolls after she was here so they were warm from the oven when we ate. It was greatly appreciated. She left the leftovers here so we had another meal from it.

Daughter Lovina, 14, and son Kevin, 13, left for school a half hour ago. I showered and washed my hair and decided to write this column as my hair dries. I plan to go with daughter Verena to her eye appointment. She went last week from a previous scratch in her eye causing problems again. Now it should be healed enough to test her vision. She had not had her eyes tested for almost four years. She wore glasses when she was younger. At one time we had our six oldest wearing glasses plus myself. There for awhile we were at the eye doctor a lot, with either a bent or broken frame. Joseph was good at losing his at school since he only needed them to read. Now Elizabeth is the only one besides me that still needs her glasses. I don’t miss having to worry about all their glasses. We also had to make sure we had different frames so no one would get mixed up which pair was theirs.

Saturday evening Elizabeth and Tim had supper brought in to them from Elizabeth’s three friends and families. Those four friends are now all mothers and I’m sure their conversations are much different from when they were teenagers. It is so nice that they all get together yet. Abigail was glad to have little friends to play with.

Sunday husband Joe, Kevin, and I were home alone with the rest all at different places. Son Benjamin, 19, was at Mose and Susan’s as they had some of Mose’s family there for the weekend. Daughters Verena, 21, and Lovina spent Saturday night and Sunday at my sisters Verena and Susan’s house. Sounds like they had a nice time there. Joseph went with Dustin and daughter Loretta, 18, to church which Dustin’s brother Clint and family were hosting at a neighbor’s place. Joe, Kevin and I played games, rested and did some reading. The day went pretty fast and I was glad for the extra naps.

I want to apologize for a mistake in my last recipe, Tater Tot Skillet Casserole. It should have said 4 cups of tater tots, not 1 cup. I rushed and that is why they say haste makes waste. Hopefully most of you caught the mistake if you tried the recipe already. God bless! 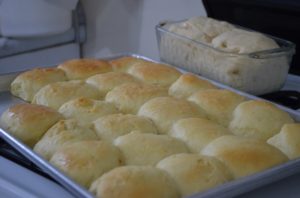 Add yeast and sugar to warm milk and let stand for 15 minutes. Stir in remaining ingredients. Stir well and let stand in warm place approximately 20 minutes until double in size. Form into 24 egg-sized rolls. Place on a well-greased cookie sheet. Bake at 375 degrees for 20 minutes.

Lovina’s Amish Kitchen is written by Lovina Eicher, Old Order Amish writer, cook, wife and mother of eight. Her newest cookbook, The Essential Amish Cookbook, is available from the publisher, Herald Press, 800-245-7894. Readers can write to Eicher at PO Box 1689, South Holland, IL 60473 (please include a self-addressed stamped envelope for a reply); or email LovinasAmishKitchen@MennoMedia.org and your message will be passed on to her to read. She does not personally respond to emails.