March! This year is going way too fast for me!

Daughter Verena and I just came in from milking our new cow, Bessie, and doing the outside chores. Son Joseph usually takes care of feeding the horses. I left the school children sleep later this morning so there wasn’t enough time. We are getting plenty of milk from Bessie.

I haven’t milked a cow since I was married almost 22 years ago. It was fun to milk a cow again but not something I want to do daily. The boys have been milking Bessie at night. Until Joseph gets faster at it, Verena and I usually milk her in the mornings. I can feel my arms aren’t used to it anymore.

When I was seven years old I started helping to milk our cows at home. Every morning and evening we had 12 to 14 cows we milked by hand. When Joe and I were married my parents gave us a milk cow, but Joe always milked her as I was always busy with the little children. Now our children aren’t so little anymore; this makes a person sometimes wish time would slow down.

Friday evening quite a few people attended the birthday party for niece Salome at the community building. Our family attended and so did Timothy and Mose. Guests played basketball and volleyball and also other games. Some of us sat and visited after supper. The community building is a nice, big place to have such an event in the cold winter months.

Joe’s sister Christine, Jake, and nine children came here for the night after the birthday supper. They were here until Saturday afternoon.

For the noon meal Joe and Mose grilled ham and hot wings. Jake and his sons froze ice cream. Christine mixed the ingredients for the ice cream. We used the cream off of our cow’s milk. It sure makes so much better tasting ice cream. I also made a pasta casserole to have with the grilled meat and ice cream. 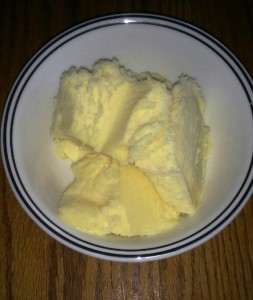 The forenoon was spent playing games. Verena also had some friends over so there were plenty of people to play games.

Matthew (Jake and Christine’s son) and son Kevin had a hard time going to sleep Friday evening. They were so excited about being able to spend the night together.

Daughter Susan took Edwin and Rosetta (Jake and Christine’s two youngest children) for a pony ride with Tiger, our pony. Matthew and Kevin also went along. It was a cold ride but they dressed warm and enjoyed it! Daughter Lovina and Jake’s daughter Miriam also went along for the pony ride.

Kevin went to bed before dark Saturday evening and slept until the next morning. He was very tired from a long day and not sleeping much Friday evening.

Sunday we spent the day at home. Our afternoon visitors were nephews Jacob Jr. and Benjamin, and niece Emma, and her special friend Menno. Timothy and Mose were here for the day as well. The boys froze another batch of ice cream. Our children like my new ice cream recipe a lot better. I’ll share it with you this week. God’s blessings to all!

Mix all ingredients together until smooth. Freeze in your ice cream freezer according to directions.