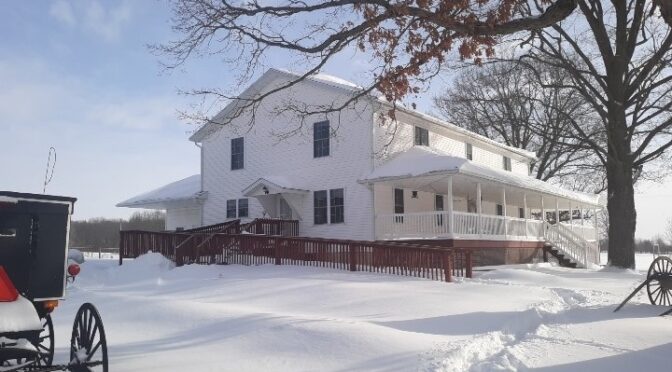 The mercury dipped down below zero degrees this morning. Brrr! It is cold outside and even colder with the wind chill. Yesterday we woke up to over ten inches of snow, which cancelled work for everyone.

Daughter Susan and her children Jennifer and Ryan were here since Sunday. She brought her laundry, and we both helped each other wash clothes on Monday and hung it all in the basement. Daughter Verena went over to sister Verena’s on Sunday night and stayed there until last night. She then went home with Susan and her children. Sons Joseph, 18, and Kevin, 15, went over to stay the night with sister Verena last night. Joseph isn’t working this week, so it’s easier for him and Kevin to go than daughter Lovina, 16, right now.

Daughter Lovina is waiting for our neighbor lady to pick her up to go to work. They both work at McDonald’s. It is almost 5:30 a.m. She starts at 6 a.m. and works until 2 p.m.

Today I’ll go to town with sister Verena. After we come back, Joe and I, sister Verena, and daughter Susan will go to the visitation of Ida, 72, a lady who lived a couple miles from here who battled with Alzheimer’s for years. She and her husband Joni have thirteen children, and two of them are our neighbors. She will be laid to rest in the cemetery down the road from us, where son-in-law Mose and sister Susan are buried. In two months’ time, three people will be laid to rest in that new cemetery. Mose was the first to be buried in there. It’s a short walk from our house, so daughter Susan often walks to Mose’s grave when she’s here.

On Sunday, daughter Elizabeth and Tim dropped off Abigail, 4, and T.J., 2, on their way to church in another church district, where their nephew was being baptized. Both children love books and were soon cuddled on the recliner with Grandpa Joe, reading books while I made breakfast. Tim and Elizabeth came for supper then and Susan and children were here, too, as well as Loretta and Lovina’s special friends Dustin and Daniel. It’s a comfort to all be together, but Mose is missed so much when we are all together. Tim and Elizabeth and Mose and Susan would often leave at the same time and drive behind each other until Mose and Susan would turn off on their road. Tim and Mose did so much together, helping each other out as they lived a few miles from each other. God makes no mistakes, we know, so we need to trust that He has a plan.

On Sunday, Abigail was playing with two dolls and had another doll laying on a small table. She kept walking past it, and I asked what she was doing. She said, “I am acting like my husband died and these are my two children.” Such innocence from sweet little children who can’t quite grasp what happened.

Dustin cleaned our drive out yesterday with his skid loader and also went over to clean out the drive at sister Verena’s house. He pushed a lot of snow. After he was done, he and Joe went to daughter Susan’s house and shoveled her drive out, too, before she left for home.

I made a casserole to take to the visitation tonight. I need to have it heated, ready to eat, and there by 4 p.m. today. I am glad to help out. We had so much help over both funerals. It is a blessing to have all the support of a church, friends, and family at times like those. Our sympathy goes to the family of Ida. Stay healthy and safe. God bless you!

Fry hamburger with onion until meat is browned. Prepare noodles as directed on package and mix with hamburger. Add both soups and sour cream. Top with buttered breadcrumbs and bake at 350 degrees for 45 minutes. Variation: Add frozen or canned peas and top with shredded cheese before adding breadcrumbs.

8 thoughts on “Mourning another loss in the community”