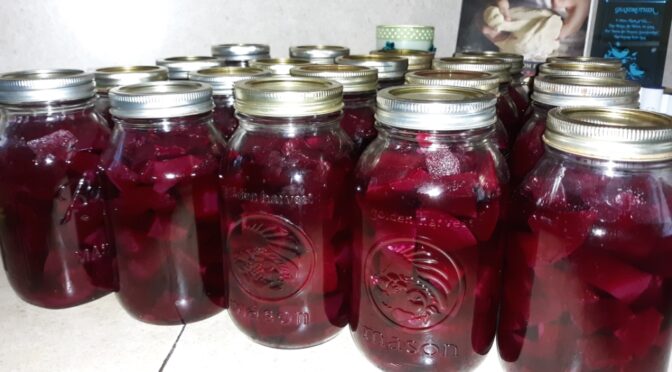 Thirteen years ago today—September 14—sister Emma and Jacob were blessed with a daughter Marilyn. She died eight and a half months later, leaving heartbroken parents and siblings. We were so close to her—how hard it was to go tell Jacob and Emma’s children and my own in school that day that their little sister/cousin had gone to be with Jesus. Often through the years, when we have seen girls her age, we wonder how Marilyn would look at that age. But it was God’s will. From the sidelines, though, I know how Emma and Jacob hurt. Such an angel! Emma was still breastfeeding her, and her arms felt so empty. Marilyn’s stay on earth was short, but she received lots of love in that time. Emma miscarried twins a few years later but wasn’t able to have more children. She is blessed with two girls and three boys. She misses her dear husband, Jacob.

We found our 18 1/2-year-old horse Ginger dead in the field one morning. Ginger put in a lot of miles pulling our family through the years. We have her daughter Midnight for our main horse. Joe trained Ginger and Midnight. Son Benjamin has her half sister Beauty for his horse.

Ginger was born six days after we moved to Michigan. Her mother, Itty Bit, was also a good horse. It’s always hard to part with a horse that has been around a long time, and you grow attached to them. She was a leader in our group of horses, so they all looked a little lost for awhile.

Our garden is all cleared out and ready to till. The garden beds still have tomatoes, green peppers, sweet banana peppers, serrano peppers, and cucumbers. We plan to can serrano peppers today, along with more pickles. We canned twenty quarts of pickled red beets on Monday—ten quarts for us and ten for Dustin and Loretta. We serve these red beets at our church lunches when we host the services.

Niece Emma and Menno are hosting church on Sunday, at which we will be having council meeting (preparatory services for communion). Lunch is usually served during the services, as the service lasts until early afternoon. A couple dozen people at a time will go in to eat until everyone has eaten. Tomorrow my daughter and I have plans to go assist Emma with whatever she needs help with for church services on Sunday.

Saturday evening we went to daughter Elizabeth and Tim’s house for Abigail’s birthday supper. She was excited to have everyone come for her sixth birthday. Elizabeth made cupcakes and had six candles for her to blow out. Supper menu was grilled hamburgers (along with all the add-ons such as lettuce, tomatoes, etc.), potatoes (cooked on the grill), cupcakes, cookies, and ice cream. We played games after supper.

Yesterday I attended a Tupperware party hosted by daughter Verena’s friend Laura. She’s a neighbor to Susan and Verena. I took our horse Midnight and our buggy to the party. Afterwards I went to daughter Susan’s house for a few hours. I wanted to be there when Kaitlyn and Jennifer came home from school. Abigail had been dropped off already. Isaiah (Ervin’s son), 4, said he goes to school, too. When they asked him what his teacher’s name is, he said Jesus. He sees the others going to school and wants to go, too.

Ervin (Susan’s friend) is now a homeowner here in Michigan. He bought the farm around the corner from Susan’s house, around a half mile from there. Next month will probably be busy, getting his things all packed again and moved to his new place. This will be so much easier for Susan and Verena to watch the children while he’s at work.

Boil beets until tender, 10–15 minutes, then drain, peel, and cut into chunks. Mix together vinegar, water, sugar, and salt. Pour brine over beets and cook for 10 minutes. Put in jars and seal. Process in a boiling-water bath canner according to USDA guidelines suggested by your local extension office or the National Center for Home Preservation website.

This recipe makes a brine for 10 quarts of beets. If the vinegar is strong, you may adjust the brine ratio to 1 cup of vinegar to every 3 cups of water.