We have entered the month of November this week. Son-in-law Mose and sons Benjamin and Joseph have been working nights to get all the leaves raked and burnt. We have lots of trees so this can seem like a never-ending job.

It seems like a while since I penned this column although it’s only been two weeks. Last week daughter Elizabeth offered to write as I was unable to.

I spent several days in the hospital having major surgery. I lost several units of blood so I still feel weak from that. The next six weeks of healing time will probably go slowly for me. I went to the doctor this week to have half of the staples removed. I was having pain in my leg and the doctor said it’s a blood clot. Now I need to take care of that so I have been keeping my recliner occupied a lot.

I cannot express enough thanks to all who have helped out. The day of the surgery I had my husband Joe, daughters Elizabeth (and baby Abigail), Susan, Verena, and Loretta, son Benjamin, sisters Verena, Emma, and Susan, and my good friend Ruth all at the hospital. What a support I felt. I went into surgery at 11:00 a.m. It was after 6:00 p.m. when I finally woke up after surgery. This was a long day of waiting for all of them. I know they were all concerned about me when it took longer than expected. May God bless them all for caring! This is called love! I am thankful that all is going as good as can be expected.

I am also so blessed to have such a caring church family and neighbors. So many meals have been brought in for us. This makes it so much easier on the girls. I feel so blessed and hope to return the kindness someday.

Yesterday Elizabeth and Abigail spent the day here. Oh what a fun pastime Abigail was to me! She looks at me and coos and smiles. It’s so precious to just “talk” to her and watch her angelic face light up. 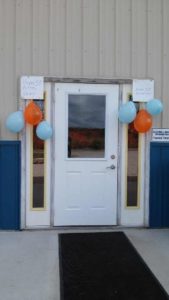 Sister Susan accomplished her goal to surprise sister Verena on October 22 at the Community Youth Center for a fiftieth birthday surprise.

Verena’s birthday was on August 22. Friends and relatives gathered there and Susan had lots of food for everyone to enjoy while they visited. All eight of us siblings were there. It was nice to see everyone again.

The blocks and mortar are here for the chimney that will be put up in our pole barn. Hopefully it will get done this week yet. We have had really nice warm weather lately which is a good thing with Mose and Susan only having a heater to heat their living quarters. After the chimney is up they will put in a coal stove and burn hard coal.

We have our coal stove going in the basement but some days we just have to open windows when it’s warm outside and bring some of that warm air in upstairs. It gets too chilly when we don’t have any heat in the house. It’s unusually warm for November it seems. Tuesday was such a nice and sunny day. The girls washed loads of laundry and it all dried and was folded and put away by evening. Days like that will be few with cold weather just around the corner. Try this recipe during apple harvest.

God bless you all!

Combine crust ingredients and press into bottom and sides of spring form pan. Mix softened cream cheese, egg, sugar, cream of tartar and spread over crust. Mix topping ingredients and pour over all. Bake at 350 degrees 40 to 45 minutes or until crust is golden brown.

6 thoughts on “Lovina appreciates family and community help after surgery”