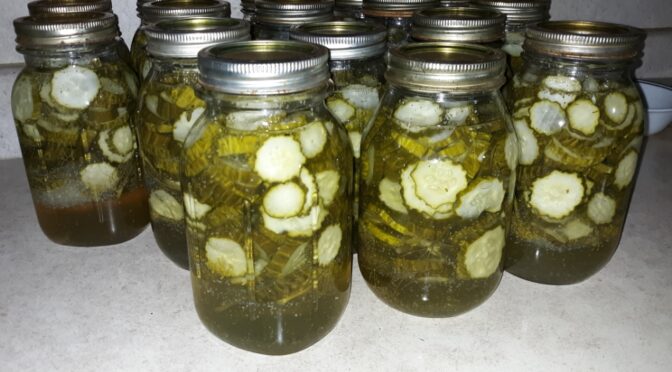 We are in the midst of canning season. Yesterday, we canned 16 quarts of sweet and sour dill pickles. Now I want to make dill spears yet. I’ll use the rest of my cucumbers to can some for daughter Loretta. This way, she’ll have pickles whenever their turn comes to host church services. I am running low in dill, so we will ask the neighbors if anyone has extra. The recipe calls for two dill heads per quart, so that takes quite a few. I use Palace King cucumbers to make my pickles. They are a firm cucumber and make nice crispy canned pickles.

Next on the agenda is to make V-8 juice. My tomato plants are loaded and need to be picked.

Son Joseph, 20, is gone this week. He’s working in Traverse City, Michigan. They never do this, but someone wanted a pole barn built by their crew, so they decided to travel the four hours and stay at a motel while they do the job. Joseph called home, and it sounds like they are ready to finish up today. They will do some sightseeing before heading home on Friday.

It seems empty without Joseph here at night. He does so many errands for me after work on weekdays. He has helped me keep the flowers on the porch watered because he knows I’m bad at keeping them watered. The flowers need water which shows I’ve come to depend on him.

Granddaughters Abigail and Kaitlyn are enjoying going to school. Granddaughter Jennifer came here with daughter Verena yesterday and said she wants to go to school too. She said Kaitlyn brings books from school.

We attended Kaitlyn’s birthday party. We met her grandparents and some aunts/uncles on her mother’s side. We also met more of Ervin’s family. Kaitlyn was so excited to have everyone there for her. Daughter Verena filled a piñata with little toys and candy for the children. They had fun hitting the piñata until it broke.

Before we went, my husband Joe grilled chicken to take along for supper. Also on the menu was tater tot casserole, corn chip salad, peaches, watermelon, mocha pudding, cake, and ice cream.

Monday, August 22, was my sister Verena’s 56th birthday. We took supper to her. Son Benjamin mowed her grass for her. Quite a few of the church people dropped off some goodies for her. She doesn’t have a garden, so the fresh fruits and vegetables are good for her. Someone also had a nicely decorated cake along with other things dropped off at her house. Dustin, Loretta, and baby Denzel also joined us to have supper with her; daughter Verena did too.

The wedding day of Alvin and niece Leanna was a very nice day! My sisters, I, and one of Alvin’s aunts made a lot of gravy for the meals. The menu was barbequed chicken, mashed potatoes, gravy, dressing, green beans topped with bacon bits and cheese sauce (corn was served instead for the evening meal), chicken lettuce salad, homemade bread, butter and strawberry jam, fresh fruit mixture, mocha pudding, pecan, peach and white chocolate pies. The wedding cake was served at night.

I met quite a few readers, which always encourages me. It is interesting to me to meet them. And of course, it was nice to see family again. We wish Alvin and Leanna a long, happy married life together.

We now have an invitation for another niece Rosemary and Josiah. They set their wedding day on October 1. This would be daughter Loretta and Dustin’s first anniversary. Also, another invitation we have and I’m really hoping we can attend is the wedding of Elmer and Wilma. Elmer is cousin Susan’s son, and this wedding would be in Monroe, Indiana. This wedding will be on September 2. 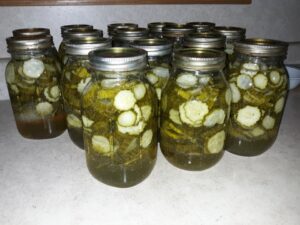 Put sliced cucumbers, dill heads, garlic cloves, and alum in jars. Heat vinegar, sugar, water, and salt until sugar is dissolved, and pour over pickles. Repeat this step until all pickles are covered. Process in a boiling-water canner. Check your county extension office or the National Center for Home Food Preservation website for the current recommended canning time.

One thought on “Lovina and Her Family Celebrate Two Birthdays”