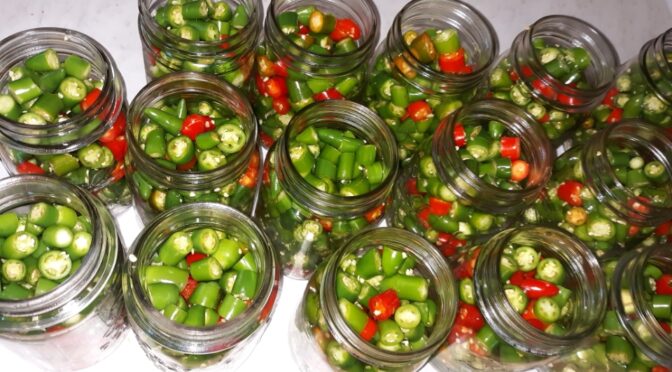 Last week we went to the orchard to pick grapes. All the households in our family went along, and our driver pulled an enclosed trailer so we could all get our grapes home. We take along 5-gallon buckets, and that is counted as a half-bushel. Some picked Niagara grapes, which make a light-colored juice. I prefer the Concord, so that was what we picked for us. Daughter Susan mixes the Niagara and Concord for her juice. The Niagara grapes were easy picking, but the Concord were more of a challenge and time-consuming, because of wet weather and hail earlier this year.

Friday we canned grape juice using steamers. I helped daughter Loretta with hers. We also brought cider home from the orchard, so we are enjoying that with popcorn and apples (we also bought those at the orchard). The orchard is a 30-minute drive away with a vehicle, so that’s why we all go at the same time.

While filling the jars from the hose of the steamer, I had an accident. The hose slipped from the jar and the boiling grape juice went over my hand. I have a pretty big burn from it. It is sore, but I get relief when I put a burdock leaf on it along with B&W salve. It’s just unhandy, since it’s my right hand and I’m right-handed. It hurts to write, and I feel sorry for my editor that has to try to read my handwriting. I need to get after my daughters to see if they will take a turn writing again. It’s a busy time of the year for the young mothers.

We also canned hot peppers, and I’ll share my recipe this week. We like the Serrano peppers. They seem to stay crisper after canned.

We also like to grow the sweet banana peppers to stuff with cream cheese and shredded cheese then wrap with bacon, using round toothpicks to hold it on. We put them on the grill until the bacon is cooked. I don’t can those peppers but like to keep some for as long as I can after the frost. We pick them and keep them in our back porch where it’s cool on days like this. Some places have had a frost, but my garden plants still didn’t get frosted.

October 2 was brother Albert and Sarah Irene’s 36th anniversary. I was 15 when they were married. Alberts are hosting our family gathering on October 15. Our family is almost to the 200 count when we are all together. One of the siblings hosts the family each year. They furnish the hot food and everything else is brought in. It accumulates to quite a bit of food.

We wish all three couples many more happy and healthy years together and God’s blessings always!

Also, congratulations to niece Rosemary and Josiah as they were united in marriage on October 1. May God bless them through their married life together.

And as I bring this to a close, I want to sign off wishing you much good health and happiness as we travel into the unknown future! God bless!

Fill jars with sliced hot peppers. Heat vinegar and water, bringing to a boil. Add sugar and salt, stirring until dissolved. Pour brine over peppers and seal jars. Process in a boiling-water bath canner according to USDA guidelines suggested by your local extension office or the National Center for Home Preservation website. Makes enough brine for 5–6 pints.