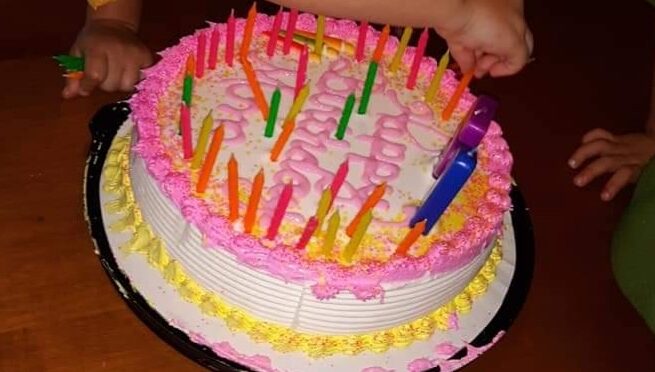 I had a very nice birthday on Sunday, May 22. All my family came for supper, bringing pizza, ice cream cake, and chips. Games were played before and after supper, and I was showered with lovely cards and gifts by all. A “5” and “1” were on my cake, but son Benjamin bought 51 candles and let my sweet little grandchildren help put all the candles on the cake. My daughter had a challenge getting all the candles lit. The children enjoyed watching Grandma try to blow out all 51 candles. I feel so blessed to call all of them family. The cards were so meaningful, and much love was shown. It was a memorable birthday!

On Saturday our new neighbors Levi and Leah moved in. They have two little children. Leah is my cousin Esther’s daughter. Esther stopped in on their way home from helping the couple move in and gave me a birthday gift. She is 10 years older than me and said she remembers well the day I was born. She said they had been doing something out in the field and her younger brother Danny came running really fast, jumped the fence, and ran to them. He was so excited to come tell them Uncle Ben and Aunt Elizabeth had another baby. I was born on the birthday of cousin Chris (their brother). Danny was killed in the same accident brother Amos was in here in Michigan eight years ago, along with another cousin of mine. Amos died a little over five years after the accident. He had ended up in our local hospital after the accident and was treated and released that day. I went to go get Amos and bring him to our house until his wife Nancy and children came to get him. He was shaken up from the accident, having seen one cousin dead and the other dying as he was pinned underneath him. Their construction crew was building a Menard’s close by and their van hit black ice and rolled quite a few times.

Included in the gift Esther gave to me were two pints of apple butter. Esther has her dad’s (Uncle Chris) copper kettle that he always used to cook apple butter. Our family and their family always had apple butter cooking days together. The evening before we would all gather at Uncle Chris and Lizzie’s house. We would all sit around their big kitchen table and snitz (slice) bushels of apples. The next day the apples would be cooked down in the copper kettle. I have never tasted apple butter quite as good as that. I look forward to trying this apple butter. I remember coming home from school and eating apple butter sandwiches. We also like it on corn mush or pancakes.

I neglected to write last week about our visitors we had one night for supper the week before we hosted church services here. It was nephew Michael and his wife Laura from Kentucky. It was nice visiting with the young couple. They were married last September. Michael is Joe’s sister Salome’s son.

On Friday night daughters Verena and Susan are hosting Robert Rogers, with his story to “live a life of no regrets.” Robert experienced a tragedy when he lost his wife and four children in a flash flood in Kansas in 2003. Hs is an accomplished worship leader, pianist, songwriter, and author of Into the Deep, 7 Steps to No Regrets, and Rise Above.

This will be held here in our pole barn with sandwiches and snacks afterwards. Susan and Verena invited our church and more people from the community, so we should have quite a crowd here. We look forward to hearing from Robert after reading his books.

Cream shortening, 1 1/4 cup brown sugar, vanilla, and egg; add milk. Add soda, salt, and flour, stirring until all flour is moistened. Dice up rhubarb and mix in. Spread in 9-inch square pan. Sprinkle with 1/3 cup brown sugar and cinnamon that has been mixed together. Bake at 375 degrees for 35 to 40 minutes. Serve warm or cold.

One thought on “Happy Birthday, Lovina!”