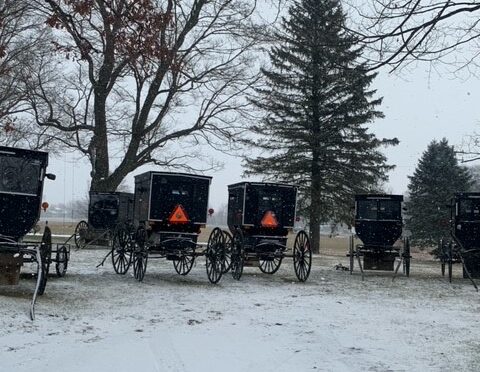 This week’s column is written by a close friend of the family.

As many of you already know, Lovina’s son-in-law, Mose, who is married to daughter Susan, was in a serious car accident in the early morning hours of Wednesday, December 9. On Monday, December 14, Mose passed away as a result of his injuries. Mose was on his way to work with his friend and co-worker Dan, who was his driver. Another vehicle crossed the center line and hit them head on. Dan was killed instantly. Both men loved hunting and fishing and enjoyed swapping stories on their drive to and from work. The Eichers ask for prayers for Dan’s wife Jodi and their children, grandchildren, and extended family.

Mose is the son of William and Rosanna Bontrager and comes from a large family consisting of six brothers and six sisters. Mose was the seventh born, which puts him right in the middle of the family.

Today (December 16) marks one week since the crash and the family is preparing for his viewing and funeral. The viewing will be held in Joe and Lovina’s pole barn starting this afternoon into evening and will continue all day Thursday. On Friday, the funeral will be held in the pole barn followed by his burial in a nearby Amish cemetery.

Within hours of the news of Mose passing was announced, church friends and family began to arrive to help with the preparations for the viewing and funeral. Men and women arrived to help clean the pole barn, house, and basement. Meals were dropped off and friends stopped by to offer words of comfort. The church wagon that holds the benches was dropped off as well as a cook wagon and cooler wagon. Two of the church women took charge of planning the meals that the family would need during the week, as well as the funeral lunch. Slips of paper with food assignments were made up and placed in a jar. As people stopped to offer their condolences they would take these slips, and will then make the breads, salads, jellos or other items that will be served at the lunch. The Amish community is caring and supportive and quickly responds when needs arise.

I had the opportunity to visit with the Eichers yesterday and they shared some sweet memories of Mose with me. Susan and Mose were married for four years and had dated for four-and-a-half years before that. They have two children, Jenny who will be 3 in January and Ryan who is 17 months. Susan told me she is feels blessed to have had Mose for all the years they had together and wouldn’t change a thing. She is grateful to have the children and will share many memories of him with them as they grow up.

Mose was a kind, generous and hard-working man. He recently took on a large house remodel project which he nearly completed. He was particularly good at fixing engines and at 10 years old he took his first engine apart. While that project did not result in a running engine it did start him down a path of many successful engine repairs. Mose was a happy, good natured person who some might describe as quiet, but those who knew him well could tell you that he loved to talk about his family and would jump at the opportunity to have a conversation about hunting or fishing.

Mose was a man of faith and he and Susan loved reading the Bible together on Sundays. Susan said if there was something she didn’t understand he would take the time to explain what it meant. She said they always prayed together in the morning. If they had a particularly busy morning and they missed their prayer time together they would both promise to pray separately. Mose made teaching his faith to his children a priority and would often talk to the children about Jesus. The family draws great comfort knowing that he is with Jesus and that they will see him again someday.

This is an unbelievable grief that is borne with the support of many, but it is still a heavy grief. Mose was loved deeply by Susan and his children. She and her family are grateful for the outpouring of love and support from the readers and especially for the prayers offered on their behalf. She asks that you continue to pray for them in the weeks and months ahead as they adjust to life without their precious Mose.

Lovina’s Amish Kitchen is written by Lovina Eicher, Old Order Amish writer, cook, wife, and mother of eight. Her newest cookbook, Amish Family Recipes, is available now online. Readers can write to Eicher at PO Box 1689, South Holland, IL 60473 (please include a self-addressed stamped envelope for a reply); or email LovinasAmishKitchen@MennoMedia.org and your message will be passed on to her to read. She does not personally respond to emails.

17 thoughts on “Community support in a time of heavy loss”