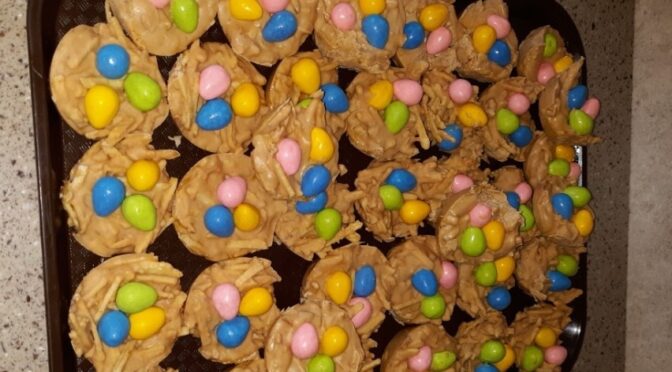 It is just after 5 a.m. and my husband Joe and sons Benjamin, 21, and Joseph, 18, have all left for another day’s work. Daughter Lovina, 16, will be leaving in a half hour for her job. That leaves just me and Loretta. Daughter Verena is still staying with daughter Susan and children. Son Kevin, 15, and nephew Steven, 13, went to sister Verena’s for the night. Steven is on spring break from school this week. Those two cousins always seem to be the best of friends.

Yesterday I cut out a dress, cape, and apron for Loretta and a same color shirt for Dustin (her special friend). They will be table waiters at a friend’s wedding in a couple weeks, which is over an hour from here. Today I want to sew it, but I’m not sure how far I’ll get. Daughters Elizabeth and Susan will be going to town. Daughter Verena will come here with T.J., 2, Ryan, 20 months, and Allison, 13 months. Abigail, 4, and Jennifer, 3, will go with their mothers. I want to get a sand box and some sand for the little ones to play with. Sunday evening the younger grandchildren thought my flower beds looked fun to dig in. They thought they could use the soil to play with the sand toys. When my children were younger, we didn’t have cement by the walkout basement. That was nice, sandy soil that my children had lots of fun playing in for hours. I used to babysit for twin boys Joshua and Jacob who were close in age to Lovina and Kevin. Those four were often entertained playing in the sand down there. It was under the porch, so they were in the shade on hot summer days.

Daughter Elizabeth said Abigail was playing outside with her dolls one day, then the next morning Elizabeth saw the dolls were still outside and brought them in. She told Abigail that she forgot to bring her dolls in the night before. Abigail asked her if she brought in the one that died. She had buried one of her dolls in the sand pretending it had died. Seeing two people that were very close to her be buried six weeks apart is probably what brought that to her imagination. Dear sweet innocent children—what lies ahead for their future? Only God knows.

Easter Sunday was such a beautiful day, with a nice warm temperature all day. Our family all came here after church and stayed for supper. We hid eggs for the grandchildren. For the adults I had small gifts on a table, and they played bingo until all the gifts were taken. Our menu was barbecue chicken, deep fried shrimp (that Tim and Elizabeth brought), macaroni and cheese, colored eggs, sliced cheese, homemade bread and butter, robin egg nests, and ice cream. It was an easy supper, with the men taking care of the meat outside. Sister Verena came here Saturday evening and was here until after supper Sunday. Son-in-law Mose and sister Susan were greatly missed like always. Life goes on, and God’s ways are not our ways. All we have is memories.

Daughter Susan and children went home for the night with sister Verena. Two very lonely ladies that need our prayers. I hope everyone had a blessed Easter—a symbol of hope, renewal, and new life! Until next week … God bless!

On April 17th, I will be signing my cookbooks from 9 a.m. to 3 p.m. at the Shipshewana Flea Market Grounds in the Antique and Miscellaneous building for the Plain and Simple Craft Fair. I hope to see some of you readers there. Hopefully a few of my daughters can come with me.

Melt chocolate chips, then add peanut butter and powdered sugar and mix well. Stir in potato sticks. Spoon the mixture into a greased muffin pan, making little nests. Place candy eggs in the nests. Refrigerate or freeze until set and remove from pan.